It’s been a while since the last Wright Wrecommendation, and it feels weird. After the Christmas and New Year period, I had hoped that things would start to pick up again with my writing. Alas, the stresses and strains of the real world came calling and took away my time dedicated to playing video games and writing about them. It’s not all bad news though, my younger sister had her first daughter, making me an uncle and throwing up all kinds of wonderful new experiences for everyone involved. I digress; whilst console gaming has not been an easy luxury for me to enjoy recently, I have increased my mobile gaming quite considerably, and one of the most recent additions to my arsenal is Voxtale. 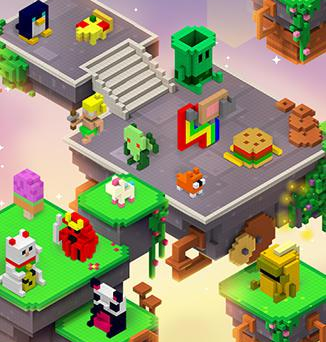 Voxtale, one of the latest games from developers Etermax, features you, a nameless “Chosen One” who is tasked with the reconstruction of a strange, pixel world following a reality altering “Incident”

The way you reconstruct the world involves a number of levels where you’re presented with a blank platform, a few coloured dots coming out of the platform and dozens of coloured cubes – I’m sure the more lateral thinking individuals out there could guess the what happens next.

You get to come over all LEGO builder like and construct anything of importance to the game’s narrative…or relevant to pop culture, at least.

Your tourguide throughout all of this, a cube-based robot you construct at the very start of the game, has all the sass and attitude of a teenager going through their angsty phase, only this is more endearing.

He’s cute, he’s cutting, and he’s got a much more foul mouth than the mascot for a suspected kid’s game should have, but I love him it.

Within the game’s side “mission” – which you need to complete for extra coins to open up new levels in the world – I’ve built everything from Rick and Morty, to the Tower of Sauron from Lord of the Rings, to Pac-Man, Mario, and Sonic the Hedgehog.

I’ve even had the ‘pleasure’ of constructing several Donald Trumps…

The gameplay is relatively easy with a very minimal learning curve, but it’s fun to see your red, blue, white, and black cubes ultimately take on the form of Sonic the Hedgehog.

It’s a similar joy to what you get when you play with LEGO, hence why I referenced it above, but you don’t have to fork out £50+ for the privilege.

Whilst not necessarily a complex game, there’s a great deal of replayability going on right now as I’ve built my collection to over 100 different buildings and amassed over 50,000 in coins in the process.

The only problem with that is, having completed the story mode completely (until the game comes out of Early Access and, presumably, gets more levels added), I have no need for it all.

I’m just feeding an addiction. Building. And gazing in ironic awe of what I’ve just created, and then throw it into my collection, never to see the light of day again.

Please, Etermax, either add more levels or bring it out of Early Access already. It’s starting to become a problem!

Nerd Rating, 5/10 – it’s a highly enjoyable little game, with a simple to pick up gameplay mechanic, and a quirky little narrative. The most fun you’ll have, though, comes through those additional builds I mentioned. And, then sadly, it’ll either start to take over your life, or sap all the enjoyment out of the game for you. Either way, at least it’s free. I’m sure it’ll get a lot better once out of that highly annoying Early Access phase that has been sweeping through the industry the past 12 months, and when it does, you’ll be able to play it on Apple devices as well. Until then though, it sits at a 5.

If you like this, try; Orbital 1, Trivia Crack, Pictionary (all mobile games made by Etermax)

I enjoy writing about anything and everything. From comic books to video games to films and TV. Heck, I've even reviewed live theatre before now. There's plenty of content out there, and it all has to be covered by somebody! View all posts by James Wright

This site uses Akismet to reduce spam. Learn how your comment data is processed.

What the Nerd posted recently